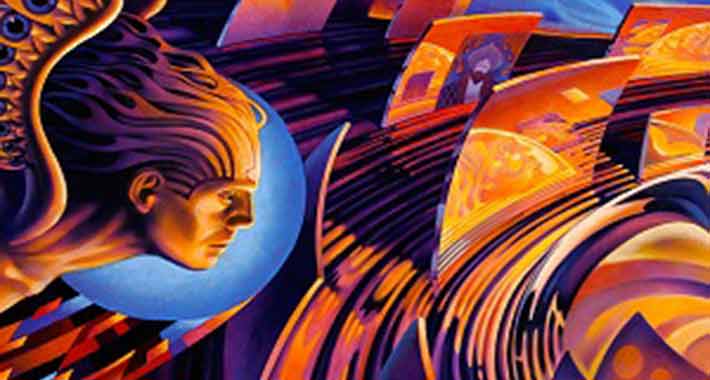 Pre-thought is the name given to the mental structure of the images he / she perceives and the ability to foresee the events. The foresight can be expressed as sight or sight.

Those with precapital characteristics are not absolute and absolute. However, the accuracy of the premonitions are higher than their feelings. The views may be changed as place, time and occurrence or may not be at all. This does not mean that they see the wrong. No image will be the last image. Presence and occurrence of what can happen will vary according to the person’s spiritual sensitivity. The precepts called the prophet and their prophecy are examples of this.

The events that will happen are reflected in the human form level in two ways.
• Precognition: The events will be displayed clearly. Future event is considered to be a sight.
• Premonition: Intuition is dominant. It is expected that something will happen but cannot be clearly stated.

Presence of the future with precapulation is clearly demonstrated by numerous events. Only at this point parapsychologists state that the future cannot be pre-designed. Neo-Spiritualists argue that what will happen in the future is partly defined as the consequences of what has been done in the past. However, there is a point in both groups that they could not be mentioned because they are not scientifically viable because the possibility of examination is not possible.

There is no time and space constraint for the soul, and in its own universe it can go both to the future and to the past, and to see every point in which it establishes a spiritual connection. During these commuting, they can transfer what they see to the item level, or people with this feature can read and see this at the level of consciousness. In fact, almost everyone lives. ”I have experienced this event before“. “I’ve been here before“. ”I’ve seen you before ı is a reflection of this phenomenon.

How are events seen without experiencing?

Most of the images are transferred by dreams in preconception events, while others can be taken as images at any time of the day. Sudden imagery can occur in situations where the psychic floors are opened in the rhythm of the alpha state or in the near-term where the trance states, such as a deep thought, is experienced. In general, images are about events that can occur within 2-3 days.

The number of people who see long-term images is small. Most of the images seen are related to people who have a spiritual connection. (Also called spiritual contact) Other images are the images that will affect the person indirectly, which will be heard, seen or connected in some way (will be effective when learned) events. Like disasters that can affect a lot of people.

Pre-cognition is largely congenital, but an event, severe traumas or accidents can lead to this feature. In those who are psychologically sensitive, those who are interested in parapsychology can also observe preclinical events in those who practice applications such as deep trance meditation. The important point here is how much contact with the psychic floors of the person. It may be intimidating in situations that are out of control or which cannot be controlled and which cannot be controlled, but which are not known, but psychological characteristics should be investigated and normalized and, if necessary, investigated by academic assistance.

Is it possible to feel or see everything?

Most of those with preconditioning or premonition are only “I have this feature, I feel everything and I see what will happen”. So only in the part of the results and knowledge. There is no activity in the pre-control phase. The proportion of those who act with the consciousness of abilir How can I see, see and want to know in advance kabiliyet is very small, and very few are able to get information related to the subject they raise.

They can’t go into all the details. The biggest reason for this is due to the differences between the dimension we live in and the dimension that is not yet experienced. It requires a larger activity in the spiritual dimensions to see or feel consciously without an event yet.

If we look at the matter plan, we cannot see the rotation of a propeller with our normal view. For the view of the front and the background at the time, it is necessary to catch the speed of rotation of a propeller and reach a level to compare between the previous movement and the next movement. To come to this point is possible to see and feel as conscious and controlled as possible.

As a talent, preconception is an unconscious act in the natural state of seeing events that will happen in the future and may not contain absolute reality. When consciousness is involved, all historical knowledge and experiences that affect consciousness will affect all the images to be seen and the possibilities will emerge. A completely non-interventionist view brings with it the obligation to be in absolute zero point, but to look back at the moment before birth where no material information has yet to be acquired.

In general, Neptune is in the 9th house, this feature is clearly seen as an innate feature.

It feels right things in advance. Many dreams are seen and dreams usually come out. To see what is going to happen in the dream, to be seen in dreams in the past is related to this position. They will be seen in the dream before. Has the ability to see the future. This vision is not the future. It is a spiritual feature. Because the concept of time and space for the soul is not limited to 3-dimensional life, short or long term views can be captured. The images may not always coincide exactly with the event, but may be symbolic. Examples of people who are called prophets are examples of this.

They can have psychicity and highly inspirational nature, and psychic phenomena provide the potential for exploring religion, psychology, philosophy, spirituality, star projection, and other profound issues. Intuition power, sixth sense is very strong.

Can the Precognition ability be improved?

How to improve Precognition ability?

It may be easier to develop if there are appropriate positions in the innate effects. These features can be seen more intensely in the signs of water, especially fish, crabs and scorpions. Because the psychological sensitivities of the horoscopes in this group are more intense, those who are in this group or those who have a suitable position on the birth chart can start their deeper skills and thus ensure their ability to be opened.

However, trans study alone is not enough. This is just the first step to be taken to gain spiritual depth. Learn and develop the techniques of clairvoyance and learn what should be done for spiritual development.

To see Precognition Ability and Future

The majority of the interviews are non-absolute images in personal and specific periods of time. The variable is in a definite fate zone. It is only about the ability of the soul to go beyond time and space. In most of those who have this characteristic, the opinions are out of control and appear involuntarily.

We can also evaluate this feature as a spiritual perception of future events. However, the course of events cannot be considered as an absolute information as it involves the possibility of being changed for different reasons. Developments in the world we live in according to the course of events occurring in the whole universe narrow down the possibilities. What may happen is that they may shift to certain dates, names and places may change.

To see the future as a spiritual feature, to have the ability of foresight; does not mean to have a definite and absolute vision about the future. Having an absolute knowledge of the future requires having a single view of all time between the past and the future, a situation that transcends the spiritual or spiritual boundaries of man. Most of those who have the ability to preconcept are only predictive of certain periods of time.

These predictions are related to events that may be linked to themselves in some way. Those who have foresight in large time periods can only express with symbolic expressions that they do not have unclear certainties. You can learn about the change of possibilities by watching the movie below (although the subject is exaggerated by the film).

Can we use our Precognition Ability at any time?

This may require long-term work with a strict discipline. This ”strict discipline an is based on our innate abilities; for a long time, loneliness, eating less, people can enter for some time such as being away from.

If the preconfluence is open to improvement among innate abilities, there may be faster progress. However, when you gerek close your eyes eye on issues such as Deep Transa, you must reach the level that can pass through theta, delta and beyond wavelengths rapidly.