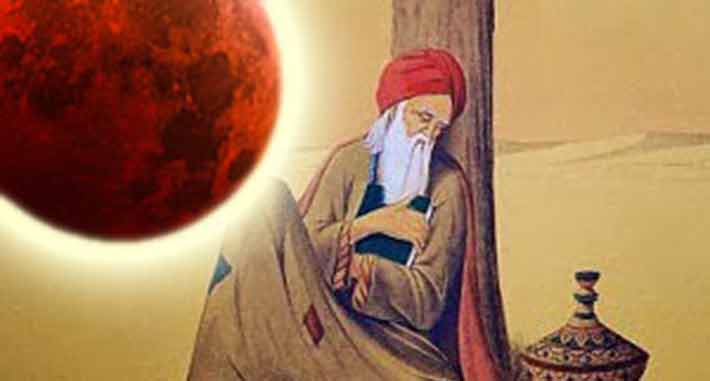 Muhyiddin-i Ibn Arabi came to Earth in 1165 in Andalusia, the present-day Spain, and in 1245 (1239) he died in Damascus. Şeyhül Ekber was named with the title of “The Greatest Sheikh”. It is a great marriage that can make the place of foundation, the tayy-i mekan¹. Many of them have left many works, many of them also translated into western languages, the people of Sufism are great..

The main point of our writing is an interesting detail that emerges as the images of the Planet Mars become accessible. Muhyiddin-i Arabi also mentions the tayy-i trips he made, and mentioned that he left some traces that people would find in the future during the trip he made to Merih Planet (Mars Planet, in his works, Merih phrase). It is interesting to note that the existence of such traces is mentioned hundreds of years before this, since it is not possible to find proofs on Mars Planet but to be scientifically proven.

Traces on the Planet Mars Are “Hi” Writing?

As we will see in the pictures we will add the traces are very similar to the Arabic “Selam” script. Let’s leave it to the scientists what percentage of the likelihood that a planet will have this shape. Let us write in Arabic and Salutation on the Word to reveal similarities and leave you with the comparison. If I am not a specialist in your language, please correct it. Sin, lam and mim letters were used when writing salaam. When we write these letters with Word, the following image appears. Mims can be written as Esselam, but all the letters are merged when printed. This may vary according to the desired meaning.

Let’s look at the article on Mars right now.

Muhyiddin-i Arabi Futuhat-ı Mekkiye after they had done their journey. Since the book is not found, I would like to compile the quotations made on the internet. When the relevant part of the book is elated, I want to update the topic again because the statements made on the internet seem to be the expression of someone else, not Muhyiddin Arabi, or Muhyiddin Arabi seems to have used those expressions for someone else. Since the citations made by Nette are duplicates of each other, I want to reconsider the case when the book itself arrives.

– With the permission of Allah (c.c), it is one of the poles that travel tayy-i space to the places allowed in the universe. Wherever he saw him, he left the people of the future with hi and so on as if he were on Mars. He even referred to the whole place he visited as “The Supply of Truth“. He mentioned these trips in chapter 1, chapter 8 of his work Futuhat-ı Mekkiye.

“There was a lot of different places in the place where I went from white to white. Someone was hotter than the fire. One enters into it and that fire does not burn the person. There are some places warm places are cold …”

Finding and Coordinating Writings on Mars with Google Earth

If you do not have Google Earth installed on your computer, you can download it by clicking on the Google Earth Program link. After you have installed the program, you can watch the video below. I left a placemark in my own program because I had already programmed the coordinates. The text is located in the southern half of the planet Mars.

Direct Coordinates For those who would like to enter, the coordinates of the alleged shape in Mars

Note: The names are taken from WordPress.

¹ Tayy-i Mekan: Change the space as Nefsi, Spirit or Physical.