How do you do Telephaty? Chapter 1 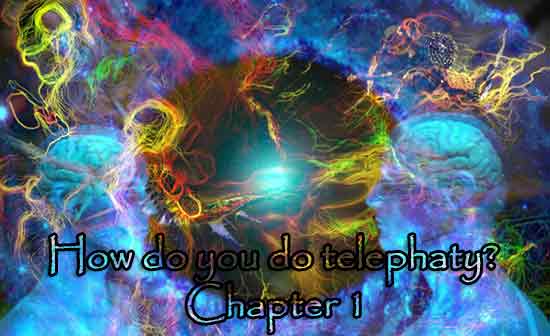 How do you do telephaty? Chapter 1

Telepathy is one of the strongest psychic abilities. It is known as one-to-one communication in which emotions are exchanged between a sender and a receiver. To convey a message correctly, you must first and foremost believe that it works. After you believe it and meditate for a few minutes, it becomes really easy to deliver a message. Although some people believe that this can only be achieved by a professional, it can actually be accomplished by most novice personalities. It should be noted that not everyone succeeds in telepathy.

To prepare for the practice of telepathy

It is very important that both the sender (sends the message) and the receiver (receives the mental message) believe that telepathy is possible. Both partners should remain open to this form of communication. The receiver and the transmitter should also really want telepathy to work. If the partners are closed, the results tend to be very poor.

How do you do telephaty?

How to do telephaty? Chapter 1

One of the primary needs of telepathy is to separate you from your physical body. This allows you to focus on thoughts and the message you are trying to send. Some methods for this are to wear headphones and play recorded white noise or to wear a white-painted glasses.

This is especially important for the recipient. If the recipient is engrossed in a conversation or dispute, he / she will not be able to accurately receive the message you wish to convey.

Step 3- Get involved in energetic mating.

There is a kind of bond between the receiver and the sender. When you have a spiritual agreement with someone (a best friend), or when you both share common interests, the energetic mating is at its peak. Try to tune in on the other person by asking her questions such as: what is your favorite color, where do you want to go and / or where do you come from?

Once this initial bond has been formed, you should try to read their thoughts before they come out of their mouths. Include visual and clues about where the conversation is heading.

This bond can also be formed when you get a “feeling” when she’s talking. That could be warmth when she talks about her background, or coldness when she says that her favorite color is blue.
Once the bond has been formed, the energetic mating can last for days, weeks or even months. Even if you are thousands of miles apart, the bond holds. This bond will help you if you actually participate in the act of telepathy.

How can I do telephaty Chapter 2

How can we do Telephaty? Chapter 3

How do you do Telephaty – Chapter 1

PREVIOUS POST
Astral Projection Meaning Astral projection experience
NEXT POST
How to Learn Telekinesis? Overview of the exercises
Tweetle
TAGS: belief in telepathy, chapter 1, how do you do telephaty, how to do telephaty, practice of telepathy, telephaty
MAKE A COMMENT