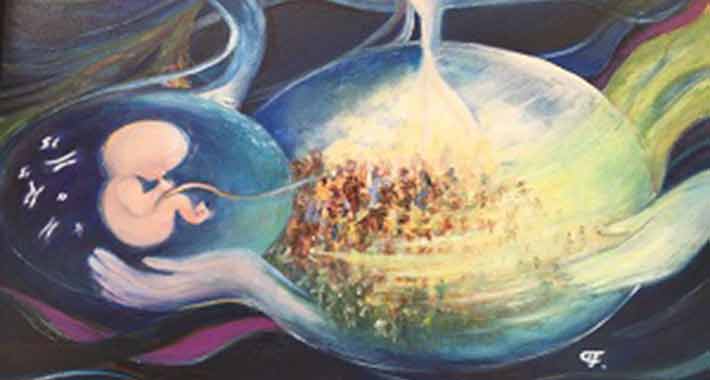 Materialization: Material or substance-rich beings appear in a different form in a different environment by disrupting the substance properties of the bodily beings. The word means materialism as meaning. Under normal circumstances it is not possible for a substance to lose its substance property and appear again or in the same place in another place, but this change is being perturbed by the impulse-pulling balance, which ensures that the substance is protected by the spiritual intervention made.

The neo-spiritualist view of phenomena of dematerialization and materialization, which can not be explained by known laws of physics, is described as the expansion and restoration of the material by spiritual intervention to the gravitational balance between material particles. The human eye sees a substance only if it has a certain amount of atoms and particulates in a given volume.

The phenomenon takes the name apport (apor) in the case of anything that is compounded and becomes perceptible by the five senses. It is suggested that apor phenomena are encountered in the vicinity of mystics, yogis and shamans as well as physical media.

The loss of qualities of a material is a physical formation becoming invisible to the five sense organs.

Spiritualists are often used to indicate the following two phenomena:
After the ectoplasm emerging from the medium comes to the perceptible state with the senses (materialization), it can not be perceived again.
Some of the physical psychic experiments, the whole or part of the body of the media, temporarily lose their material properties, disappear from the middle.
In the event that anything that has disappeared is an object, the phenomenon is called asport. It is argued that the disappearing products sometimes appear elsewhere. Often we can evaluate the incident as “aspor” that I did not put it here.

It reminds us of the activities of the scientists of the activity of the material which breaks the structure of the matter brought by the nonmaterials that cause these phenomena to come into being in the spiritual folds and provides the formation in a different place again. It is inevitable to shed light on future scientific developments with the resolution of the mechanism.

I think these two concepts also clarify the questions about the mechanism of some events or how they might be. Was there no amulet in your house? Or did you find it somewhere other than where you put it? Have you found an unrelated person you are confident of putting in another place?