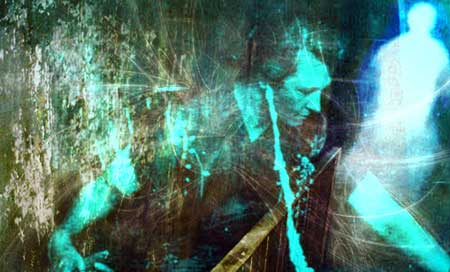 What is Apparition? How are gin, ghosts, angels and other beings seen? Why do we see them in different ways?

What is Apparition? In its original name, apparition is a definition used in spiritualism. It is used to define how other entities or images, called ghosts, are formed. It is about how energetic beings and beings that are outside the dimension of matter become visible using different molecules or light.

Apparition, by definition, relates to how other entities use elements unique to our dimension so that they can be seen in our dimension. Direct real appearance of being; it is not about the mental vision of the third eye or the telepathic vision.

Spirit photographs Ectoplasm, a material visibility is obtained by using the substances mentioned in the formula and reflecting the light.

Under normal circumstances, assets of different sizes cannot be seen at the substance level. Because the frequencies are different. Imagine that the ventilator in the current size is turned off and rotates at the fastest setting in the other dimension. This difference leads to a different view of the dimensions.

If you have examined the frequency vibration tests carried out by Tesla, it indicates an earthquake effect when you set the frequency device to the frequency of a building. The situation in Tesla’s experiment also applies to the presence of entities in two different dimensions. They need to be on the same frequency to see each other.

Are Genies and Other Beings Really Visible?

Normally, it is not possible for us to see other dimensions of assets with their actual images. As in the example of precognition, this is only possible when we can touch each wing with our hand by capturing the rotational speed of a rotating ventilator and displaying the slow motion rotation.

Such a view is a matter that transcends the possibilities of the body because our sensory organs have perception thresholds, and nothing above and below these thresholds cannot be perceived. However, when spiritual characteristics can be used, perception may be possible when the same frequency speed is reached.

Differences in Material and Spiritual View

However, Genies, angels and other beings who see, how can see. The importance of the definition of apparatus also emerges here. The images that are subject to the apparatus can be perceived by everyone because the image is of a material nature. What a person sees can be seen in other people, photographed and displayed.

However, the resulting images may not be actual images because the molecules used to gain a material appearance may be shaped by psychics or trans-matter entities in the sessions. In this configuration, imaginative reflections can be made.

Why can’t everyone see what a person sees?

It is not about the topic, but it is a topic that needs to be addressed in order to better understand the issue of the apparatus. For fun at night, only one person in a group who tells each other horror stories says that they have seen ghosts or gin. He points to the point he sees with fear, but others do not believe that they are being mocked because they do not see anything. Although he insists on seeing it, he cannot convince anyone.

A lone person in the family sees a person who has died before, but not others. When he leaves, he asks others if they see them, but everyone gives them the intensity of his sorrow.

Khidr or a saint by the hand of the elderly uncle passes across the road. He raises his head to thank, but cannot see anyone, asks where he is going, but no one has seen.

This and many other examples are available worldwide with different cultures and religious definitions. Unfortunately, since these examples are difficult to believe and are not included in the scientific definition, let me just explain why one person sees one person and others cannot see it.

Spiritual view can be discussed in two parts

1- The voluntary vision obtained after opening the third eye. In this view, the opinion extends from the matter dimension to the beyond matter by making certain applications. The opinion is made only by the third person. Others can’t.

2 – Voluntary, involuntary or bilateral views (during sessions, as in psychics) directed towards people beyond the substance. In this view, other beings equalize or vibrate at the same frequency. What they look like can be realized through imaginative projections. Telepathic effects and perceptions relate only to the person who is focused. It cannot be seen and perceived by other people, but it is very rare that other people who are close to the frequency of the visionary can see and perceive.

In both cases, only the people contacted can see because the vision is spiritual. The frequencies used in radio communication, or when you dial a phone number, only the phone that uses that number rings.