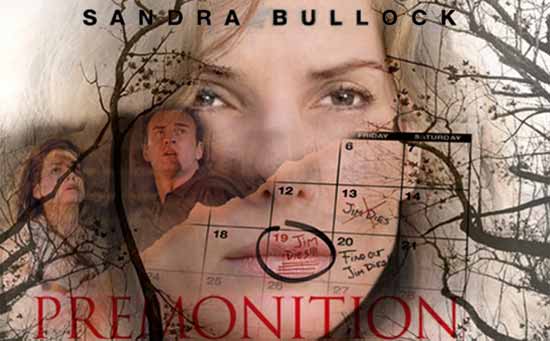 Can you prevent the death of a person you love? Can love change the course of events? What if you caused the event you wanted to prevent!

What happens when a person is capable of both foresight and intuition? When you want to prevent the events that you see happen, what you see or your feelings prevail?

The movie is about a woman who sees her husband’s death before she dies and tries to prevent her husband’s death from what she has seen. The movie is based on a foresight, but what follows is based on what it sees and the search for truth through feelings. Before the end of the movie, why not say “premonition“, not “precognition“? In fact, the movie “Premonition” feature can be a good study of how misleading.

The movie is one of those movies that cannot be understood how deep it is without being watched to the end. The first chapters will probably bore you and say “familiar, ordinary issues, mediocre“. Those who remember the “6th sense” movie know; was the last scene to make a movie. This movie is among the sixth sense movies. But we can say more dramatic and sad.

The movie is dominated by a gloomy autumn psychology, which can affect you negatively if you are in a mentally complex situation or have just lost a loved one. Those who will just watch a movie or study pre-cognition and pre-cognition issues may find the first episodes boring. It’s a movie that requires attention, but I can’t say it’s as dense as the “dungeon island” island. If you are patient and watch the movie to the end, you will see that it has a very impressive fiction.

The movie consists of two parts; each episode begins with Linda (Sandra Bullock) awakening. The first part is about the part before his wife dies and the second part is about the part after his wife’s death. From time to time in the movie “which is real” you can live in emotional depths can be called. For those who do not watch the movie, I do not want to miss all the details and taste.

Some of the topics discussed in the uncontrolled Precognition (foresight) and Premonition (hunch) events in the “loss of sense of reality” is among the topics covered in the movie.
Since Linda’s sense of reality fully reflects what she sees, she has had a hard time understanding what is real and what is imagination. Even though you have understood what is actually happening while you are watching, you can say ortaya whichever comes true artık.

The movie tells the story of how it can be seen as if it were happening before the event happens, through two people who have lost their old love. I don’t know if the movie was taken from an incident, but there are many similar events. Those who foresee or feel that their spouse’s or relatives’ friends will die can only understand that they have seen the truth after the events have taken place.

How can you prevent it if you foresee what happens to a person you love?

In the film, Linda uses the love we all need to prevent the course of events, despite her frustrations with what she has learned. Is he gonna make it? When you watch the movie, you realize that “you have to lose to remember the value of some things” I think this is something that we people are in the nature.

The subject of “schizophrenia” was added to make the movie impressive. The movie has been focused on this for a while. It was attempted to reflect a drama in which those who intervened with their mental abilities and the drugs used after these interventions worsened.

If you are interested in parapsychology and spiritual abilities; I suggest you watch the events that will happen to you if you are one of those who have seen and felt before. If you watch from a large screen, you can be sure that the large shooting plans will impress you.